My grandmother on my mother’s side was German, and my great grandmother was really German, Bavarian royalty somewhere in the lineage. I think that may explain why we served the sweet and sour red cabbage dish known as Rotkohl with our Thanksgiving turkey. I have taken up the tradition and modified it a bit over time.

The Winter Farmers Market in Milwaukee provided an opportunity to pick-up a couple key ingredients. The red cabbage and onions came from Pinehold Farms and the bacon and a beautiful smoked pork shank were products of Lotfotl Farms (the name stands for Live off the Fat of the Land).

Here is our current version:

We are using bacon lard and bacon “broth” generated by using our oven roasted bacon technique detailed here. Our bacon was used for BLTs the night before.

[Alternative approach: If you cannot or choose not to obtain a smoked pork shank, a half pound of bacon can be diced, and rendered in the pan at the time the shank is added in the recipe below. Omit lard and add 2 cups chicken broth for bacon “broth”.]

Carefully removed the rind of the smoked pork shank in the largest pieces possible, and discard pieces smaller than 2 inches in size. Carve meat off the shank and dice. In a large stock pot over medium high heat, place the bacon lard, shank bone, skin pieces, shank meat. Allow to brown for 2 minutes, but do not burn. Add onions and sprinkle with salt. Reduce heat to medium and caramelize and soften onions, about 10 minutes. Add a dash of water if they begin to burn before softening. When caramelized, add bacon “broth”, water, and wine. Bring to a boil, then reduce to a low simmer for 1 hour.

While pot comes to a boil, prepare spice packet by placing next 5 ingredients into a pouch made from cheese cloth and tied closed (or use my preferred method, unbleached tea bags). Place spice packet into broth just for the last 30 minutes of simmering and then remove. Remove the bone and large skin pieces and cut off any loose meat from the bone and return diced meat to the pot. Taste broth for flavor, and add salt if needed. It should be as salty as a homemade chicken broth.

Return pot to a low boil and add grated apple, cabbage, vinegar and sugar. Cook for 30 to 45 minutes, until softened but retaining some crispness. You will have to determine the level of texture you prefer, but this should not be overly soft at this stage. Remove from heat and place into a large, non-reactive container for storage overnight.

The next day, drain cabbage, retaining 1 cup of liquid. Mix corn starch with liquid.Bring vinegar and sugar to a low boil in a medium saucepan over medium heat until sugar is dissolved. Add liquid to vinegar mixture and bring to a boil to thicken. Add cabbage and heat through. Adjust flavors with vinegar, sugar, or salt as needed. The resultant dish should have a meaty, smoky flavor with a sweet/sour finish. Serve with rich beef dishes, alongside game meats, or as my family does, alongside the Thanksgiving turkey.

This deep, rich beef dish, is prepared with two cuts of beef, vegetables, mushrooms, and nut brown ale. To stick it closer to the Belgian tradition, perhaps a Duvel should be the choice, but we’re preparing it to our Great Lakes Cuisine standards, so a Great Lakes regional brew is the choice. We chose Ale Asylum’s Madtown Nutbrown Ale for the caramel malt flavors. As it is only currently available in Illinois and Wisconsin, you should drive to one of those state right now to get some.  If that is not an option, consider a malty, amber beer, while avoiding a strong hop character because as the beer cooks down, an over-powering hop flavor may present as bitter in the final dish. It may not as well as each beer reacts a bit differently to the fats and cooking times, but we’re cooking a fair amount of beef here so be selective.

Remove the roast and vegetables to a large platter and cover to keep warm. Meanwhile, drain the pan dripping, retaining one cup of liquid. If there is not one cup of liquid, supplement with beef broth.  Mix corn starch with 2 Tbs. cold water. Return pan to the stove top over medium heat, add 1 cup of liquid and cornstarch. Bring to a boil while scraping all the pieces of browned matter from the pan. Remove from heat immediately upon thickening to a gravy. Pour generously over roast and vegetables. 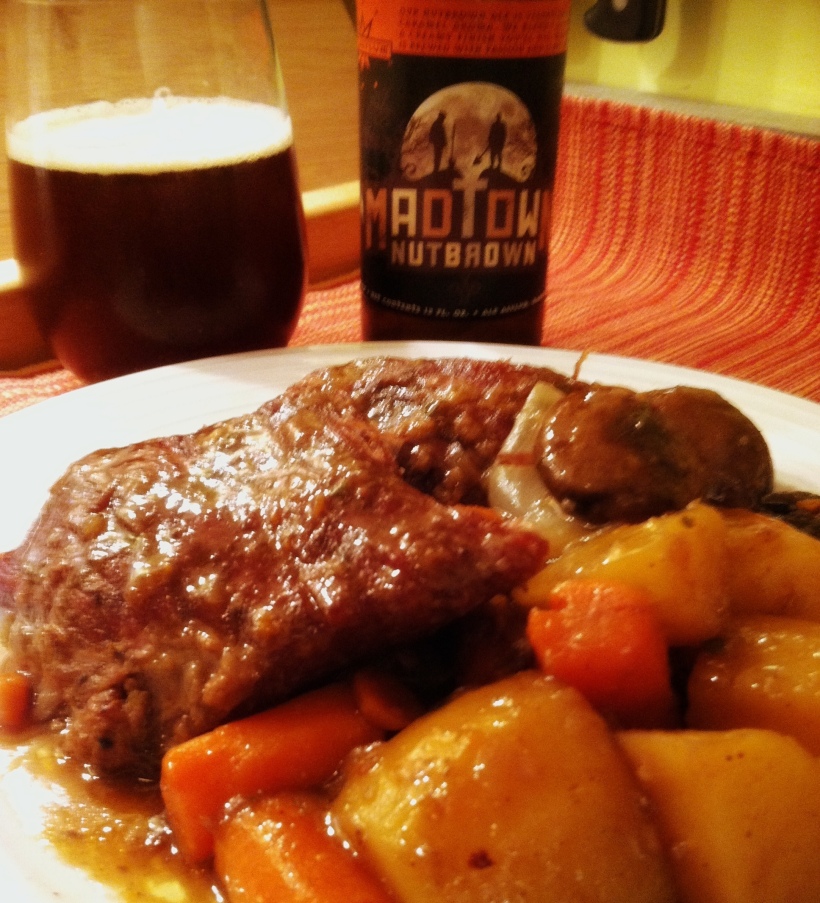 Light the fire at sunrise; it’s ready at sundown. But only on the perfect autumn days somewhere near Green Bay, Wisconsin, as the crisp chill startles you awake when you walk outside. When the sun isn’t up yet, but the horizon is the pale blue of promise, trees stand as black silhouettes against the sky – this is when you start the fire in the barrel. Then let it cook all day, enjoy it at sundown. But the process actually begins earlier.

The previous night, over cold beers and good conversation, we chopped carrots, peeled potatoes. A large pressure cooker was already going on the stove-top when I arrived. Inside, chicken bones and skin boiling. The butcher had kindly skinned and de-boned the thirty pounds of whole chickens, making the prep a bit easier, but the flavors had to be captured.  Peter insisted the onions be finely diced, so they would melt away in the cooking process. I happily complied, never shed a tear. When the carrots, potatoes, celery, and ever-so-finely-diced onion were chopped, bagged, ready for tomorrow, we split a final beer. But the process really began earlier. 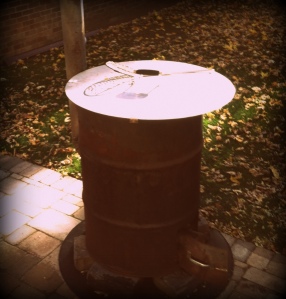 Peter owns the specially prepared barrel needed to make an authentic booyah. They had to travel across the state to find the right stainless steel wash machine inserts which, when welded into a closed cooking pot, fit perfectly atop the 55 gallon drum. You can find a recipe, you can study the history, but in the end, a key part of the process in how you cook it, not just what goes in. Booyah is cooked outside, over an open flame, lit at sunrise. How much does the process add to the flavor? Not sure. But like a clam bake on a beach in the Cape or a luau under the warm Hawaiian skies, the cooking process is part of the tradition, part of what makes this authentic. And what you want here is authentic. This isn’t about innovation. This isn’t about your “take on it”. This isn’t about creativity. This is about tradition. This is about who knows the oldest recipe, the first use of the term, the most authentic version. This is where a dish transcends any individual participation, and you become immersed in a tradition. So obviously, the process begins much earlier.

September 1852, two families from the Wallonia region of Belgium decide to immigrate to the United States. Perhaps inspired by their story, a significant group of families decide to follow the next May. As they travel, they decide to accompany a group of Dutch families heading to Wisconsin. So after an ocean voyage and train rides across this young nation, they chose not to settle in the growing cities of Chicago or Milwaukee. They likely traveled north by stagecoach, along Lake Michigan’s western shore. As the sun rose upon the waters of that great lake, they would have seen rolling fields and forests covered in the mists of a spring dawn, and geese flying north in a silent, V formation. They settled northeast of modern-day Green Bay, where the forests of the peninsula began, and formed a new Belgian colony. It is estimated between 5,000 and 7,500 Walloon-speaking Belgians settled in the three-county area around Green Bay from 1852 to 1856. 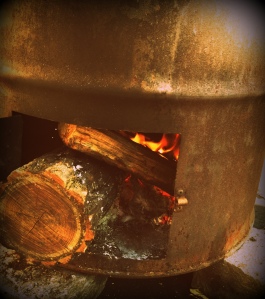 These were farmers, loggers, miners; people working with their hands, carving out a new life, in a raw, rugged land. The Peshtigo Fire of 1871 wiped out much of the logging, but cleared land for farms to quilt the landscape. These farmers would gather together for camaraderie, to share stories, to remember their traditions. In fall, they would gather over a harvest stew, not unlike a traditional chicken bouillon, with carrots, celery, onions, whole chickens over an open fire. Potatoes and corn, staples of the early American farm, were added. Along the way, a more unlikely ingredient, oxtail finds it way into the stew. A farmer looking for a richer texture, additional flavor, or was it simply leftover from another family dinner? The reason lost to time, but a tradition was born. And the name? There is a pretty common explanation (and a fair amount of discussion about who has the “most authentic” recipe), but for me it simply comes down to pronouncing bouillon in a thick French accent and someone spelling it like it sounds.

A booyah is not a recipe, but tradition. It is a process of making a harvest stew, but as much about the process as the stew. This is about fall and friends. A chill in the air. A fire lit at sunrise. So when friends start to gather on the patio around noon, the fire is glowing embers, and the pot is steaming. Peter wants to keep it to a low simmer, a rapid boil will dry out the chicken. After hours of cooking the oxtails are fished out and broken down, most of the bones removed, their rich flavors suffused through the stew. We talk. We drink beer. I try Duvel for the first time, a strong blond ale from Belgium. A friend of Peter’s at Milwaukee Brewing Company brews a Belgian-style saisson, named for Peter’s stew. We drink some of that too. The kids are running around the neighborhood, dressed up for Halloween. The golden glow reserved for late autumn shines through the rustling leaves. Another beer. More friends arrive. The sun settles down beyond the horizon – booyah is ready.

The stew is full and rich, in flavor and in mouth-feel. If you enjoy the difference between a home-made chicken soup and a store bought variety, the difference is likely the rich, fatty mouth-feel from the skin and bones of the chicken. We’re going several steps beyond. The broth created from the skins and bones from the pressure cooker have been added. The oxtail creates a lush richness to the stew. The onions have melted away. I’m not sure I can taste the smoke of the fire, but after spending the last few hours huddled around the barrel for conversation, I smell of smoke, and it adds something to every taste. Wash it down with another beer. These are good times. These are good friends. This is good food. A Belgian beauty – booyah.

Light the fire at sunrise; it’s ready at sundown.