Origins of a dish are an ephemeral thing, full of nuance and speculation.And as debates rage about the invention of many dishes in the modern pantheon, those dishes morph and change to accommodate modern tastes or based on ingredient availability so the current incarnation may bear little resemblance to the original dish. The Salade Niçoise is just one example of many.

A farmer market bounty of beautiful greens, fresh green beans and new potatoes connected quite naturally to my recollection of a Salade Niçoise. The “Americanized” version typically includes green beans and new potatoes along with the required tuna, anchovies and Niçoise olives. Versions of this recipe can be found many places (such as Saveur, Epicurious or even Julia Child). Amazingly, two of those three listed, including the Julia Child’s version, does not even include Niçoise olives.

Consensus seems to building on what should be in a Salade Niçoise based on the opinion of Jacques Médecin in his book Cuisine Niçoise (a great discussion on that can be found here) which explicitly forbids new potatoes and green beans and features tomatoes much more prominently. This approach is apparently more faithful to origin in Nice, France. The current American version is akin to calling a dish Florentine because spinach and white sauce were added, with no real connection to Florence, Italy.

The inspiration of our salad as French mattered only in so far as it further tied the dish to Great Lakes Cuisine due to the historic settlement of the Great Lakes region by the early French voyageurs and fur traders coming down what is now known as the St. Lawrence seaway. Yet the belief that the inspiration was the classic French salad led to a much deeper investigation of the French history in the Great Lakes region. Much of the settlement of the area was not by French nationals or French military simply claiming lands in the New World. The process took generations and was much more gradual. In fact, many of the enduring settlements in the region were populated to a large degree by a multi-racial, multi-cultural mix of French and the indigenous peoples, which can be more accurately captured by a term not often associated with the Great Lakes region – Creole (read more about the use of that term here).

The research into French settlement in the region further led to details on the farming communities which were established to support these settlements. In one, there is a very specific mention of raising beans and potatoes to support the community. And so we are brought full circle to our Early Summer Salad presented here.

In our preparation, the green beans and potatoes were cooked over an open fire, which even furthers our connection to our early French settlers. A soft boiled egg tops our salad, rather than the more Mediterranean options of anchovies and tuna, though whitefish would have a good option in this preparation, which were reported to be plentiful around the French settlement in La Baie (which became Green Bay, Wisconsin).  And no, there are no olives here.

An argument could be made for calling this a Creole Salad in line with the larger discussion on mixed race settlements alluded to earlier, but Creole Cuisine is already largely defined in the American mind and would only cause confusion. So we elected to simply call this our Early Summer Salad in honor of the harvest time for the ingredients. This is not a Salade Niçoise. This is, however, Great Lakes Cuisine. Local ingredients with lengthy ties to the area, ethnic traditions provided inspiration (though in a very circuitous fashion), and re-imagined for modern tastes. Imagine this coming fresh from your own farm, prepared over an open fire. Even better if you don’t have to imagine it.

Prepare grill to medium heat. This can also be prepared stove-top. Place cast iron pan large enough to hold potatoes in one layer on to grill. Toss potatoes with butter, pinch of salt, pinch of garlic powder, and pinch of herbs de provence. Add to cast iron pan. Place diced bacon into a cast iron pan large enough to hold the green beans and place on grill to cook until just crisp. Remove bacon and leave 1 Tbs. of fat in pan. Add green beans and toss with bacon fat to coat. Allow green beans to roast for approximately 20 minutes or until just cooked through. Allow potatoes to roast for approximately 60 minutes until soft and golden crisp. Poach eggs in gently boiling water, about 4 minutes.

Note: We make a house vinaigrette with a house-made malt vinegar made with a wheat saison, but apple cider vinaigrette will work well here. We also roasted shallots to add to the dressing as well. Store bought will work fine, or consider making one with 3 Tbs. vinegar, 1/2 cup oil, and Penzey’s Country Vinaigrette seasoning mix and then add a shallot, diced and caramelized.

To assemble salad, toss greens with just enough vinaigrette to lightly moisten. Pile greens on plate, add a small pile of green beans and a few potatoes per plate. Top with poached egg, a spoonful of vinaigrette and sprinkle with crisped bacon. 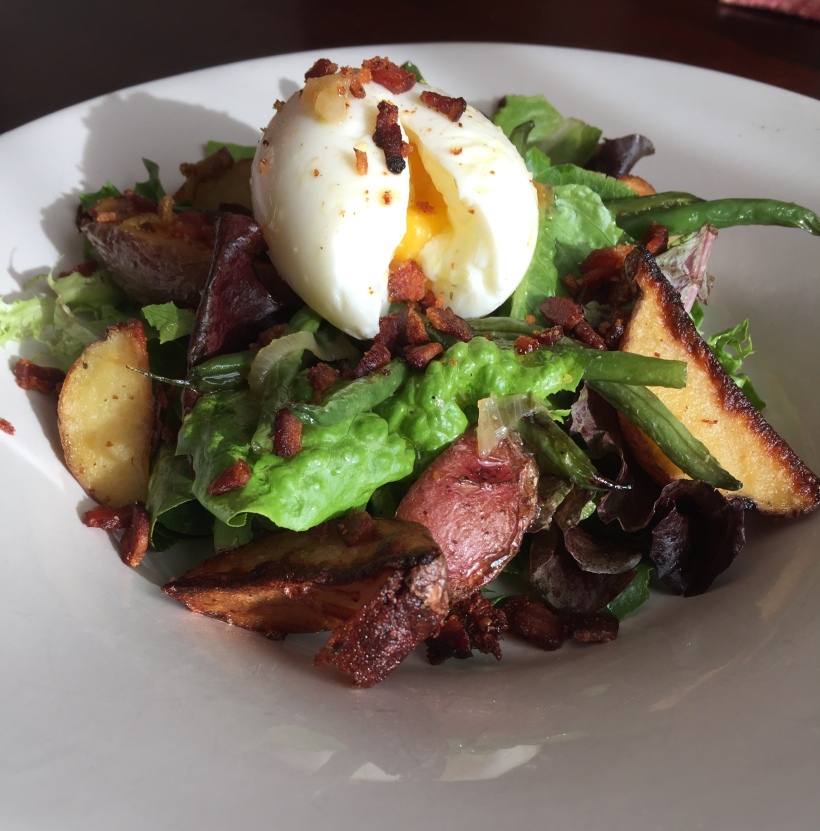 Discussions of cuisine are fraught with historic, ethnic, and racial overtones which are impossible to avoid. Unavoidably, discussions of cuisine, such as this one, are a bit more academic than singing the praises of farm-churned butter, but they are important. We have touched on the larger discussion of defining a cuisine in reflecting on the video shared by founders of NOMA, widely recognized as instrumental in the promotion of  “Nordic cuisine”. They do an excellent job exploring the ill-defined bounds of culture and history when considering cuisine of any geography. But in the end, the victors write the history books…and the cookbooks. This means for the Western world a culture of cuisine dominated by traditional European imperial powers.

The more recent rise of technology in our increasingly interconnected society has lead to two countervailing trends. We have experienced an exponential rise in our access to information across geographies and across times, experiencing other cultures and food traditions in the process. Yet as we rely more and more on technology to communicate and share experiences, we have come to prize authenticity. We seek authentic experiences rather than overly constructed and controlled experiences, authentic voices over hyper-produced, corporate media stories. And then there is the search for authentic food.

This search for authenticity in food involves a number of loosely related but poorly defined terms such as “ethnic”, “cultural” and the very word “authentic” while seeking to avoid approaches which are mass produced or reek of cultural appropriation. A recent interview with Krishnendu Ray, a food studies scholar at New York University, appeared in the Washington Post which suggested the American dining public may only “pretend” to like ethnic cuisine, while demonstrating an unwillingness to pay prices in line with more Western European food traditions. In the interview, price becomes a proxy for genuine appreciation and is then extended to suggest a level of ethnocentrism across the American population.

Equating price to appreciation seems a fair approach, but suggesting it also indicates a marginalizing of non-Western cultures may not be as clear. A very informal bit of research on Google helps to illustrate the point. Searching for a set of leading culinary traditions with either the term “cuisine” or “food” associated with it, we then compute the ratio of “cuisine” to “food” and then multiply by a factor of the number of mentions to derive a “Prestige Rank”. Recognizing that Google filters results based on location and past search history, we have to assume similar searches may yield slightly different results, but we feel comfortable suggesting these results help to illustrate a different view than that suggested in the interview with Ray.

These results are sorted by Prestige Rank, from high to low, and yield some interesting insights. French is by far the highest ranking in this view, which given that the word “cuisine” is of French derivation, is not much of surprise. Spanish and Vietnamese have the next highest ratio, but appear much less frequently. The appearance of Italian and Japanese may not be a surprise, but the high ranking of Indian, Thai, and Chinese suggest a level of appreciation of these cuisines that may be underestimated when simply equating price to appreciation.

The lowest ranking traditions helps to illustrate a counter-point to a view that American food choices demonstrate pervasive ethnocentrism. Irish and Polish food traditions exist in America, and perhaps nowhere more wide spread than in the Great Lakes region of the U.S.  Those traditions rarely are spoken of in terms of “cuisine”. Irish food is more widely associated with bar food and the Polish traditions of pierogis, paczkis, and sausage hardly command premium prices. Even English food traditions rank poorly. These are some of the most well-established ethnic groups in the U.S. and yet those food traditions are not appreciated nor do they command high prices.

This suggests the simple approach of using price as a proxy for appreciation is fraught with many more layers of historic and ethnic viewpoints. Perhaps we view this issue of “cuisine” from a different vantage, as we are promoting the idea of cuisine for an area not traditionally appreciated in those terms. Greater education and promotion of any tradition can help broaden public understanding and appreciation of the nuances and value of each unique approach. This view may not square as neatly with the simplistic claim that Americans are ethnocentric and merely “pretend” to like other foods, but perhaps mutual appreciation could be a better starting point for the discussion.