Earlier this summer we praised the rise of the nano-brewery – the tiny one or two tank brewery, open to the public, making great craft beers such as those from Buckle Down Brewery near Chicago, IL. We enjoy the standard micro-brews as much as the next beer-crazed locavore, from the long standing traditions around Milwaukee, WI (Sprecher, Lakefront, and the more recent Milwaukee Brewing Co.) to the rabid fan-base growing around Grand Rapids, MI with good cause. But we’re talking here about the start-ups, the tiny places, the ones where the founder is the brewer and maybe 50% of the workforce. This is one step away from home-brewing. These places have a very different feel. There is passion, there is ownership, there is just a bit of tension about how it will all work out. These places reflect the founders tastes directly and are inherently hyper-local.

A recent addition to the nano-brewery scene in Milwaukee, WI is Brenner Brewing from Mike Brenner. A recent networking event held there allowed for a tour and tasting of their beers. As with so much of culinary scene we explore here at Great Lakes Cuisine, the offering from Mike are both throwbacks and completely modern.  The bar in the front of the brewery is simple, clean and opens to the outside street by garage door. mike was there to talk us through the tour, his background, and a selection of the beers on tap. Mike is probably most proud of his City Fox Pale Ale, and justifiably so. We also enjoyed the Star Baby IPA (shown above), which benefits from the addition of lightly roasted malts and open fermentation tanks.  The result has all the hop finish expected in an IPA, but starts closer to a fruity flavor, balanced with a bit of maltiness. This isn’t a single note IPA.

But the real conversation starter was the Brenner Brewing version of a Rauchbier called Bacon Bomb. 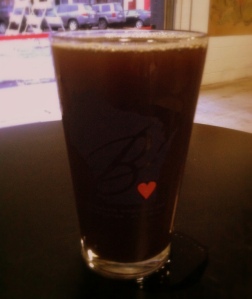 The Rauchbier style is not often seen, but the key ingredient is smoked malt. Here is how Brenner Brewing explains it – “A blend of German beechwood and Wisconsin cherrywood smoked malts. Noble German hops, chocolate wheat, and fresh black pepper add a subtle bite. The yeast strain keeps the body light to balance the huge flavors and nose…” It tastes like liquid bacon in the fullest, meatiest expression.  It immediately brought to mind our bacon-infused bourbon experiment, though Mike assured us not a bit of actual bacon was used in the brewing of this flavor explosion. Here is how the German Beer Institute website explains the rauchbier style.

Once upon a time, all beers were Rauchbiers, so to speak. The term Rauchbier simply means “smoke beer” in German, and with the ancient kilning methods of drying green brewer’s malt over open fires, all grains picked up smoky flavors and passed them on to the beers made from them. Today, however, with “clean” malt being the dominant brewing grist, old-style “smoke beers” have set themselves apart as an atavistic rarity, a throwback to a time gone by.

The similarity to the Scotch whiskey distillation process is interesting, though in the brewing tradition in the US, the full flavored approach was dropped with the rise of factory brewing. Diversity of flavors, approaches, and ideas of what a great beer should be were subsumed by the homogenization of brewing companies. This, in it’s essence, is what nano-brewing is all about; bringing back “ancient” methods and making a thoroughly modern brew that is so unique it could only appeal to a few, passionate souls who partake of it. This is the meaning of craft. This is Great Lakes Cuisine.

One thought on “Smoked Malt Beer and The Meaning of Craft”