Across the regional cuisines of the Americas are dishes which reflect both a point of origin and the place of creation. The unique hybrid of Japanese approaches with Peruvian ingredients as showcased by Nobu in New York is one of the more surprising combinations, and demonstrates this interplay of “point of origin” with “place of creation”.

Many hallmark dishes of Great Lakes Cuisine clearly express their “point of origin” in Germanic, Norwegian, or Polish traditions, yet they have been adapted not only to local ingredients, but also to local tastes, many times over several generations. Porchetta/Porketta is another great example of the process. Porchetta originates in Italy as a tradition of stuffing an entire pig with herbs and roasting until fall-apart tender. The current keeper of all that is good and sacred about Italian food in America, the prophet Mario Batali, recently shared his version of his Dad’s version in the December 2014 Food & Wine magazine. Iron Range Porketta is another “version”, handed down through generations of Italian immigrants coming to work in the Iron Range, which stretches across the northern sections of Minnesota and Wisconsin.

Iron Range Porketta caught our interest when an America’s Test Kitchen article ran a few years ago detailing a trip to Hibbing, MN, in pursuit of the fabled regional roast. Mario’s version gave us the inspiration to try something new with something traditionally Great Lakes. Instead of the lean roast with added fat from a sausage stuffing in Mario’s version, we stuck with the pork butt approach used by Fraboni’s in Hibbing, MN. But the addition of the fennel bulb in Mario’s version made sense, rather than simply the fronds and fennel seed. We also used fresh garlic rather than powder. Finally, many versions suggest the addition of vegetables under the roast while it cooks. Mario suggests red onion, his father uses carrots, onions and fennel bulb, a comment on the Hibbing article contends carrots, onions and potatoes are the right addition. We elected to add another staple of the Iron Range, rutabaga, along with red onion and fennel bulb. We served this as a Sunday dinner one night, but the real fun was adapting this into our version of a Porketta Sandwich.  The end result is neither traditional Iron Range, nor traditional Italian. It is Great Lakes Cuisine.

Hard rolls, such as a ciabatta

Preheat oven to 375 degrees. Pork butt will contain a bone in approximately the center of the roast. Place the roast on a cutting board with the fat side up, cut from one side to the bone, and cut around the bone to remove without cutting all the way through the roast. The result will be a boneless, butterflied roast. Evenly spread half the fennel bulb, all the garlic, fennel fronds, fennel seed, and 1 tbs.salt and pepper across the opened roast. The result should look something like this: 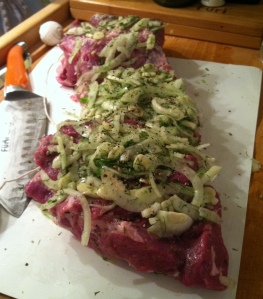 Then carefully fold the roast back to the original shape and tie the roast in several places with butcher twine to hold together for roasting. Place red onion, rutabaga, and fennel bulb in a large roasting pan. Set the roast on top, and sprinkle with remaining 1 tbs. salt. Roast for 4 hours, tented with foil for the first three hours, until the pork reaches 150 degrees or is fall-apart tender. This is a fatty roast, it is hard to over-cook it, so if in doubt, go longer.

At this point, the roast can be placed on a platter, tented and allowed to rest while the vegetables are pulled from the pan. If having this as a dinner, the vegetables ran be served alongside a sliced roast and enjoyed. We enjoyed it. But…we had leftovers and that is when the fun really begins.

The fat left in the pan after removing the vegetables was saved and refrigerated. The next day we had this: 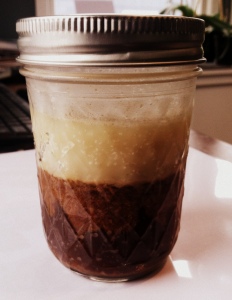 The top layer is pork fat with just a hint of fennel bulb flavor. The bottom is the gelatinous, concentrated essence of pork. We wanted to do a version of the Hibbing Porketta Sanwich, but with a Mario-flair. Mario suggested slices of his lean pork roast with a bit of home-made hot sauce, and that served as a jumping off point.

The rutabaga was golden, soft, with a texture similar to a beet, but with flavors hinting toward cooked cabbage or turnip. We pureed the rutabaga with just the top layer of pork fat until smooth, then added salt and dried herbs to taste and created an herb “butter” to smear on our toasted hard roll.

The fennel and red onion were also pureed, this time with the bottom layer of pork essence, cider vinegar, and salt, to creating a bit of sauce for our sandwich. The result needed depth, so a re-hydrated ancho chile added just the right color and depth, and just a pinch of sugar, to create a very nice “ketchup”.

The pork roast was shredded by hand, removing any difficult sinews and excessive fat, then reheated. We added home-pickled sweet peppers instead of the hot sauce Mario had in mind. The result: 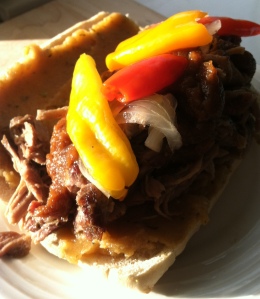 The pork was rich with overtones of fennel, which echoes the flavors of great pork sausage, but with the texture of pulled pork. The “ketchup” added a contrasting zing, added by the pickled sweet peppers. The herb “butter” brought all the flavors together, with a texture not unlike hummus, but a flavor closer to well-roasted cauliflower.

The result of this little flavor experiment wanders far from our Italian point of origin, but it certainly explores our sense of place. No self-respecting bar in Hibbing is likely to serve a rutabaga puree on a Porketta sandwich, but we’re playing around with culinary ideas that share the same geography. Much of regional cuisine does this and Great Lakes Cuisine is no different. And definitely worth the effort.

One thought on “You say Porchetta, I say Porketta…Let’s Have a Sandwich”