Frequent readers here know that we have an unhealthy obsession with this creation known as Hoppel Poppel (read more on our earlier post here). Quick synopsis of the required ingredients:

Variations – Any root vegetables diced. Any member of the allium family. Any leftover meat, diced. Any egg, any style. Cheeses, many beautiful cheeses.

In some ways, the variations may be closer to the original than the Basic given above. The Basic is based on the dish as it appeared on a number of diner menus in the Great Lakes region over the last 50 years. Particularly in Milwaukee, the recipe always included “salami”, which is understandable in the home of Klements and Usingers. But what is called “salami” on these menus is really much closer in style and moisture content to beef summer sausage, rather than the much harder Italian-style true salami. The alleged origins of hoppel poppel was as a simple a way for the Germans settling in the Great Lakes region to use leftovers. The boiled potatoes from the previous evenings dinner were diced and fried in butter with onion and a bit of leftover meat.Mix in a few eggs and you have yourself a hearty and economical breakfast.

It is in this tradition that we have the most fun. Leftovers create some of the most memorable dishes. Bits left from a labor-intensive dinner preparation re-appear in the morning as effortless additions. One of my favorite all-time dishes was made by my good friend Tom after an epic roasting session with a whole leg of lamb went into the wee hours of the morning. The whole leg of lamb dinner was a labor. The lamb hash the next morning was all bonus; beautiful, effortless. We present two variations on Hoppel Poppel here – one  in the spirit of leftovers and and another which is a bit more fanciful.

We began with leftover potatoes and sweet potatoes which had been cooked over the campfire the previous evening, fried in butter with onions, and topped with a slow-fried duck egg and goat’s milk jack cheese from Caprine Supreme.

The purple potatoes we used in this preparation were a local farmers market find and inspired a pairing with a Lavender Jack, also from Caprine Supreme. 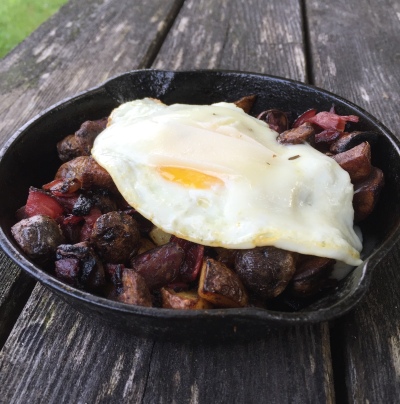 So go forth and experiment. Please feel free to share your creations with us here or on Twitter at @greatlakesfood.