Bay View is in many ways a quintessentially Milwaukee neighborhood. Within a year of the opening of The Milwaukee Iron Company in 1868, the village of grew as a company town around the steel mill. According to the Bay View Historical Society, “Cottages erected for mill workers became the center of the village. Many of these cottages are still occupied today and are a part of the diverse architecture of the Bay View neighborhood.”

The neighborhood borders Lake Michigan and the factories shown billowing smoke in the picture above have long ago been replaced with far more modern industry. Portions of the neighborhood fell into disrepair beginning in the 1970s as the entire Midwest began to adjust to the changes in heavy industry, but a recent resurgence of the neighborhood has been lead by chef-led restaurants, craft beer bars and craft brewers. Thankfully, much of the architectural identity of the area has not only been retained, but highlighted.

One of the early chef-led restaurants in the area was Honeypie. Long a personal favorite for lunch, we recently returned for dinner and were reminded of the reasons we love this place. The description offered on their own site captures many of the key ideas we treasure in Great Lakes Cuisine:

Honeypie was opened in 2009 and from the very beginning our goal has been to make great, Midwestern-inspired food from scratch. From our pickles to our pie crust we believe that good food is rooted in the way our grandparents used to cook. Real food made by hand with real ingredients. We use as many local meats, produce and other ingredients as we can. In fact, the majority of our ingredients at Honeypie are sourced from Wisconsin.

Local, scratch-made, inspired by generations of culinary traditions – these are many of the elements in our definition of Great Lakes Cuisine. What their self-description does not capture is the inspired innovations they also bring to their menu. Our dinner consisted of the following:

Mac & Cheese – Just because we can never get enough of that decadently creamy cheese sauce, we went with bacon topped macaroni. 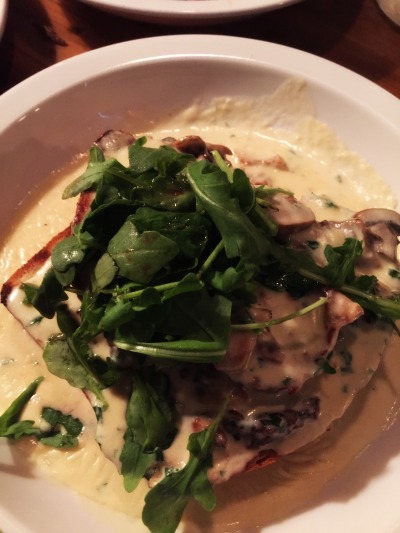 Hot Brown – Thick sliced toast is topped with sliced turkey and then loaded with a mushroom cream sauce and topped with dressed arugula. More an open faced turkey sandwich than the classic Louisville Hot Brown, but still comfort food in the very best sense. 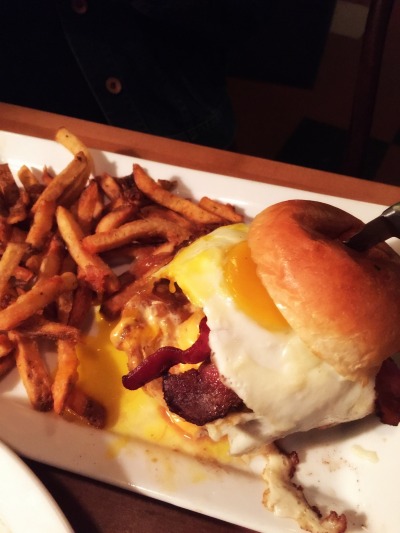 Burger – A return of the fries, but this time as the side show to the main attraction, a burger of Wisconsin grass fed brisket, fresh ground, topped with cheese, bacon, and a dripping sunny side up egg. Impossible to eat with any delicacy, it’s so good you will end up just mopping up bits of goodness with the house made, brioche bun.

More recent menu offerings have included the Cornish Pasty, house-made pretzels with aged-cheddar beer cheese sauce, and chicken pot pie. All items we have featured here as well. They also serve a wide array of award-winning pies, so keep that in mind as you order.

The menu at Honeypie definitely brings a fair amount of global fusion, and it seems that same sense of culinary adventure infuses even their local offerings, which fits them into our vision of Great Lakes Cuisine. Much like the Bayview neighborhood, the cuisine of Honeypie has adapted to new flavors and new approaches with out loosing the character of long-standing traditions from the area.