The many smaller lakes in the Great Lakes region provide a variety of species of fresh water fish. Some folks shy away from preparing the Northern Pike due to the additional row of bones (“Y” bones), which can make it a bit trickier to prepare.  There is a fairly simple technique to handle the bones, detailed nicely here. But my current favorite preparation is to pickle the pike in a similar manner to herring. The pickling brine dissolves the additional row of bones and allows for cleaning the fish in a standard fillet. The result is a very firm, delicious pickled fish flavor, unlike the far more oily herring, which stays soft even upon pickling. 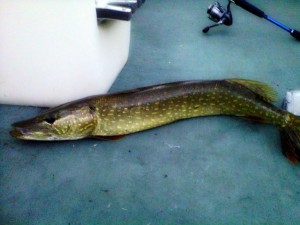 Pike strike hard and are aggressive fighters. They have a nasty habit of swinging their toothy jaws violently back and forth as they are brought into the boat.  They’re a lot easier to handle on the pontoon boat than in the row boat, but the firm, white flesh is worth the bit of adventure. We prepared them according to the following recipe and then enjoyed them as a local version of traditional smørrebrød.

Dissolve 1/2 cup salt in 2 cups of cold water and place in non-reactive container to fully submerge the fish. Refrigerate for 24 hours.

Drain, rinse, and cover with white wine vinegar. Refrigerator for 24 hours then remove and drain.

One thought on “Pickled Pike”