Necessity is the mother of invention. It also leads to re-visiting the past. We were looking for the best way to use some excess wild rice stuffing which we had prepared for use in stuffing a kabocha squash (bit more on the kabocha here). We used wild rice from Northern Wisconsin, pre-cooked in chicken broth and tossed with sauteed onions and crumbled chicken sausage. Don’t want to waste that. 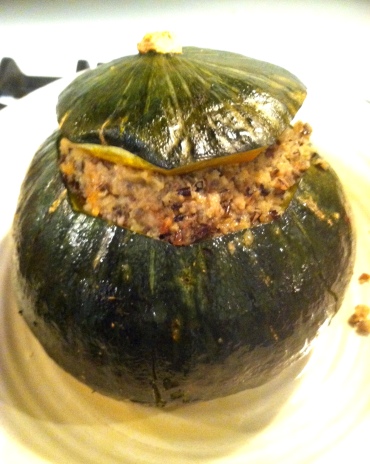 We were serving this with roast chicken, so we could stuff the bird, but stuffing the whole chicken has a few downsides. It adds mass to the bird which requires greater cooking time, which in turn leads to either an over-cooked bird on the outside to ensure complete cooking in the inside or the risk of under cooking the inside of the bird to keep the outside moist.

Memories of a recipe from Rick Bayless provided the inspiration. Chef Bayless presents his version of a Roadside Grilled Chicken, which involves removing the backbone of the chicken and flattening the bird for more even cooking. When we prepared this for the grill, we loved the flavor but also the versatility in cooking the bird.

So instead of stuffing the chicken, we split it and flattened it over a bed of the wild rice stuffing in an earthenware pan. We slid butter mixed with sea salt and oregano under the skin and slipped it into a 450 degree oven. After 10 minutes, we turned the heat down to 350 degrees to complete the cooking time. The skin was crisp, the fats and flavors ran down into the stuffing, and the chicken was kept moist by the steam rising from the stuffing. This was an ideal solution. It was also a delicious, family-style version of Great Lakes Cuisine. 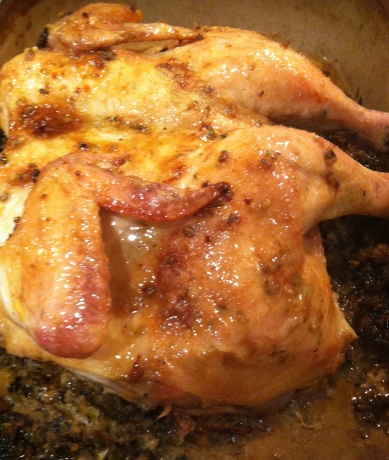 The process is known as spatchcock and works just as well for a turkey or any number of birds. For us, this is the easiest and tastiest way to prepare an ample amount of stuffing and still quickly prepare a perfect bird. Experiment and enjoy.