A year ago, the crunch and tang of home-cured quick pickles became an inspiration.  That was fitting, as the man that had prepared them has been an inspiration for my appreciation of the growing Great Lakes Cuisine trend.  Chef Jason Gorman prepared pickled carrots, radishes, and turnips as part of a variety of small tasting samples at a dinner to discuss a new restaurant concept.  As happens with so many great ideas, a variety of issues derailed the project, none of which were related to the culinary vision. Chef Gorman has moved on (and up) to take the executive chef position at the Art Institute of Chicago, but the ideas he was exploring in Milwaukee left an impression on the city, and on me.

Chef Gorman opened a bold new venture, Dream Dance, at the Potowatomi Casino in 2004 and began to explore creative ideas around a “New Wisconsin Cuisine” (read an early interview here).  His desire to re-conceive a number of traditional area recipes through a prism of high quality ingredients and world-class presentation was completely new to the city.  His unrealized venture was to explore those same ideas in a bistro-like setting, rather than a formal restaurant.  Milwaukee is diminished by the absence of his vision.

The willingness to look around in the local market for culinary inspiration is a step beyond simple farm-to-table food.  Across the Great lakes region, menus are replete with local ingredients prepared in the Italian-American or French tradition.  Just as common are the standard preparations of steak, pork, salmon, or tuna. Another steak house might be a commercial success, but fails to add to the culinary-cultural tradition. Chef Gorman’s Chicago roots and particular understanding of the local culture

enabled him to look at the lowly bratwurst and re-imagine it prepared with lobster.  His quick-pickled vegetables fit perfectly into that same vein.  He is not the first to quick-pickle vegetables, and in fact follows other into what is becoming a bit of a trendy look back at some very old traditions, but it is the combination of different preparations into a cohesive vision that both echoes and re-imagines the Great Lakes ethno-culinary tradition.  It is his vision that led to my viewing Great Lakes Cuisine as an emergent trend.

In the spirit of echoing and re-imagining an idea, here is an adaptation of the quick-pickled vegetables of Chef Gorman.  In this recipe, carrots are pickled in cider vinegar and the spices add a unique flavor profile. 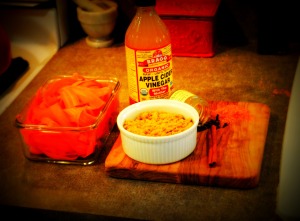 Using a mandolin or vegetable peeler, slice carrots into ultra-thin shavings and place in glass jar.  Boil all other ingredients until sugar and salt are fully dissolved. Fill jar with liquid and affix the lid.  Pickles will be ready in 24 hours and hold for up to two weeks.

Prepared in this way, the carrots are an excellent addition to any number of sandwiches, adding a crunch and surprising burst of flavor.  If you prefer, slice the carrots on the bias into ¼ inch slices, boil for one minute in the liquid and store as before.  Serve as a bar snack.

Cauliflower with addition of 1 tbsp. of mild curry and champagne vinegar

Use of the malt vinegars from Tavern Vinegar Company

2 thoughts on “Of Pickles and Inspiration”