The find of our autumn trip to the apple orchard was a bountiful crop of Pippins. As one of the varietals in an apple pie it has the advantages of enormous size (which cuts down significantly on peeling and coring!), a tart flavor, and a surprising ability to hold shape through the cooking process. If you can’t find Pippins, Honey Crisps will work as well which were in abundance for our next trip. 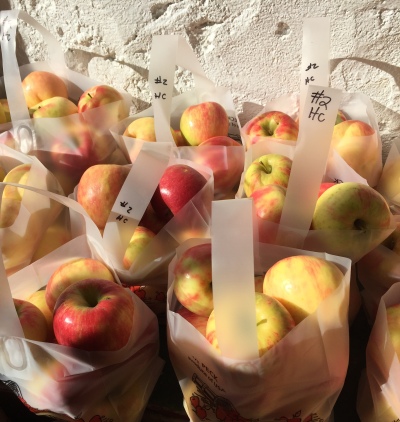 Our end goal was to recreate the amazing hand pies we stumbled upon in an early morning trip to the farmers market in Sheboygan, WI. These beauties were made by an Amish baker and I suspect the flaky crust may have been from the use of lard rather than just butter. I swear to you, the crust was as good as the filling. My daughter and I sat looking out on Lake Michigan in the warming glow of the early autumn sun and ate them as breakfast.

Our own attempt to recreate the hand pies was good, not great. I regret not going with the lard and instead using vegetable shortening. The crust did not have the flaky, golden texture we were craving (and that you can see in the picture above). But by happy accident, we had prepared twice as much filling as we needed. To the two-thirds Pippin, we added one-third Gala, which breakdown in cooking and add sweetness. The apples were tossed in sugar and cinnamon and the left to marinate for a few hours in the refrigerator. A quick, throw-together crumble seemed like any easy way to use what we had left over and the result was surprisingly great. The addition of sweetened dried cranberries added a very nice textural addition and a dash of sour to the sweetness of the apples. Thought we’d share:

Mix the diced apples with the sugar and cinnamon and allow to marinate in the refrigerator for a few hours.

Remove apples from the refrigerator. Pre-heat the oven to 375 degrees. Place the apples into a 9 inch baking pan. In a separate bowl, mix all remaining ingredients and mix until just crumbled together, then spread over apple mixture. Bake for 50 minutes or until apples are tender and mixture bubbles at the edges. Allow to cool for 15 minutes before serving.

We enjoyed this as dessert with a scoop of vanilla ice cream and house-made caramel sauce. But with a nice cup of coffee, it would make a lovely breakfast as well. Particularly if you can enjoy it looking out over a lake as the autumn sun rises.