The Dane County Farmers’ Market in Madison, WI, is a treasure trove of culinary delights. Madison may just be the perfect place for a farmers’ market – centrally located for local farmers, a populous which appreciates locally harvested, organic foods, and a setting on the Capitol Square. For those of you who have not had the pleasure to visit Madison, the Wisconsin state capitol building is a classically beautiful, white granite clad structure, topped by the largest granite dome in the world, located in the center of an isthmus created by two pristine lakes, surrounded by lawns, walkways, and sculptures. The greater area around Madison includes the Driftless region, an area untouched by glacial flows, which boasts many farms and more than a dozen artisan cheesemakers. The setting helps explain why the Dane County Farmers’ Market is the largest producer-only farmers’ market in the country. The farmers, bakers, cheese-makers are likely to be the one behind the table, handing you your new favorite culinary discovery.

A recent trip produced more than the usual number of treats, but the highlight was a few offerings from Bleu Mont Dairy. Willi Lehner has received many national accolades for his bandaged cheddar, made from locally produced milk, wrapped and smeared with lard, then aged on cedar shelves in a cave he built into the hillside. This is old-school cheese making folks. And he can also yodel like a boss.

We selected the sheep milk Tomme and Alpine Renegade. The Tomme is an Alpine style, but with sheep milk in this variety rather than the more traditional cow milk. According to Steve Jenkins’ Cheese Primer, the term is an ancient word which meant “chunk” or “round”. Basically, the washed rind makes the Tomme look like a small boulder as it ages. Alpine Renegade won top honors in the American originals open-category at the 2013 American Cheese Society awards and is classic alpine-style, washed rind, cow’s milk cheese. Take a look at the beautiful color and texture of this offering –

Our cheese plate also included a hearty Five Grain Sourdough bread from Madison Sourdough, slices of apple, and a quick apple chutney. The apple, a golden russet variety from the market called Ashmead Kernel, has a texture which veers toward Asian Pear and a tartness which mellows out to a honey sweetness. The apple chutney was prepared with onions caramelized with thyme, unsweetened cranberries from Honestly Cranberry, several varieties of apple and a dash of cinnamon and cloves. 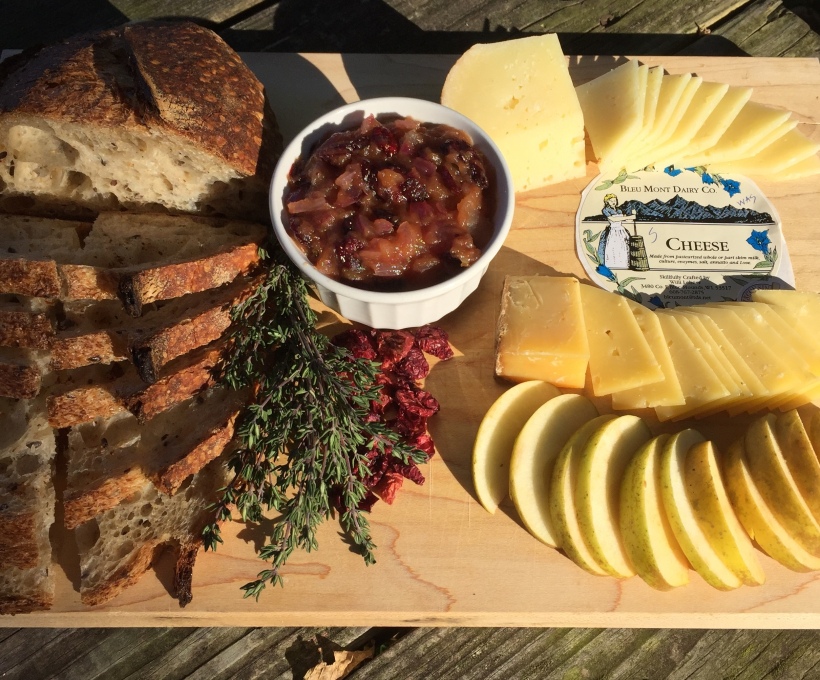 The Tomme starts with a toasted bread aroma and blends into the grassy/herbaceous/dry straw nuances of sheep milk but a more caramelized finish than many sheep milk cheeses we’ve enjoyed. The texture of the Alpine Renegade is smooth with small holes rather than grainy and the flavor strikes me as starting with cooked milk solids (you know those bits of cheddar that ooze out of the grilled cheese and get crunchy in the pan? Like those smell) and then melts into a wonderfully funky and long lasting finish. This Renegade is no wilting flower, providing a lovely counter-point to the tart sweetness of the apple and the sour punch of the cranberry in the chutney. Some cheeses might get overpowered by the pronounced flavors of the chutney and fade into background notes – this cheese demands equal billing.

The lovely bandaged cheddar from Bleu Mont Dairy is often available for shipment from Fromagination in Madison and will also sing beautifully with this combination of flavors. But if you can find the time some fall Saturday morning, the drive to Madison to find Bleu Mont Dairy on the square is well worth the trip. Who knows, maybe you’ll get a chance to hear Willi yodel.