Skip to content
September 28, 2014February 14, 2021 robertholtonwi
Seasonality is a foundational idea in Great Lakes cuisine. The seasonal cycles in the region are pronounced and the agricultural traditions respond accordingly. The traditions of preservation, so important to Great lakes cuisine, is clearly derived from the seasonality. Some of the traditional meals also fall in line with the turn of the seasons. As summer fades into the golds of autumn, apples are one of the many fruits which reach full harvest. Here we use our bounty of apples in a variety of ways to add a bit of flavor to our smoked turkey.

Apple-Glazed Smoked Turkey
1 Turkey Breast (Preferably bone-in, skin on)
Prepare brine:
4 cups apple juice
1 cup salt
1/2 cup brown sugar
4 bay leaves
4 whole cloves
1 cinnamon stick
Bring to a boil, then simmer 5 minutes.
Add 4 cups ice (ice will chill brine and bring to proper salt level.  I prefer an “ocean water” level of salt, rather than some more heavily salted brine recipes.)
Place turkey in large non-reactive container, just large enough to hold it. Cover with brine and allow to marinate at least 4 hours, but no more than 8 hours.
Prepare smoker with applewood chips to 250 degrees. Place turkey on the smoker for 3 hours or until internal temperature of 160 degrees.
While the turkey smokes, prepare the glaze:
1 cup apple juice
2 bay leaves
2 whole cloves
1 cinnamon stick
Over medium-low heat in a sauce-pan, reduce by half, then remove seasonings.
Add 1/2 cup brown sugar, reduce over low heat until a thick syrup.
Brush Turkey with glaze every ten minutes for the final 30 minutes of cooking.
Remove turkey from smoker and allow to rest for ten to twenty minutes before carving. 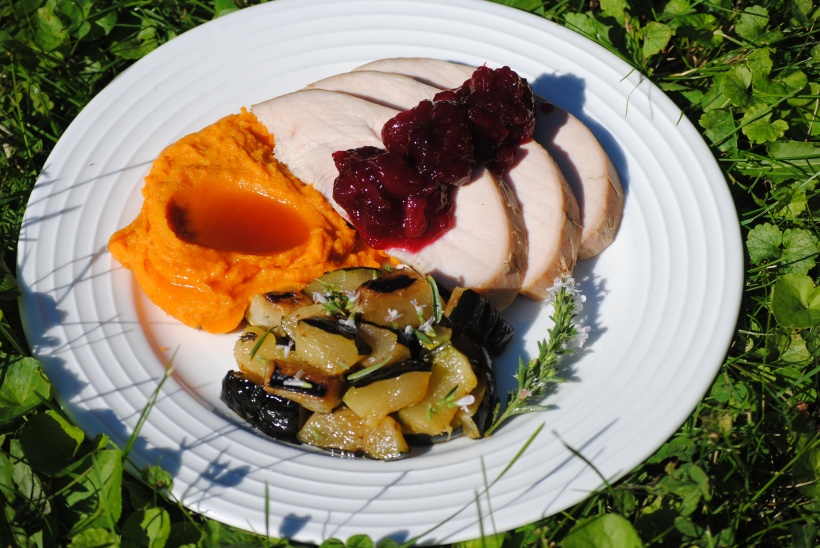 We served this with our mulled cranberry sauce (recipe below), pureed roasted sweet potatoes, and grilled zucchini dressed with winter savory leaves and flowers. Winter savory flowers have a mild, peppery finish which adds a nice flavor, in addition to the visual appeal.
Mulled Cranberry Sauce
It is worth noting, the apple variety we used in the cranberry sauce was a Zestar, a cultivar more recently developed by the folks at my alma mater, the University of Minnesota, the same genius minds that brought us the Honeycrisp. You can use any variety well suited to applesauce.
1 lb fresh cranberries
1 apple grated (skin on, cored)
1/2 cup apple juice
1 tablespoon orange zest
1 cup organic brown sugar
1 tsp. ground cinnamon
1/2 tsp. ground clove
1/2 tsp. ground ginger
Combine all ingredients in a medium sauce pan over medium heat. Bring to a boil then reduce to a simmer. Allow the sauce to thicken, about 20 minutes. The majority of the cranberries will begin to burst and the natural pectin will thicken the sauce as it cools.  Allow sauce to cool overnight or at least 8 hours. Taste for flavor. Add maple syrup to reach desired sweetness.
Advertisement